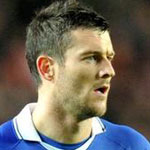 Nugent was a player who commanded a big transfer fee of £6 million when he made the move from Preston North End to Portsmouth in 2007. He arrived at City in the summer of 2011 on a free transfer from Fratton Park, and made his competitive debut in the 1-0 victory over Coventry City in the opening day of the 2011-12 season. He scored his first goal for the club in a 2-1 defeat at Bristol City later that month.

He signed professionally with Bury after failing to win a contract with Liverpool from their youth Academy and his form with the Gigg Lane club, where he scored 18 goals in 90 league games, attracted the interest of Preston North End, who he signed for despite interest from Burnley. Nugent never looked back, scoring 35 goals in 93 games for North End and earning his big-money move to Pompey. He was a regular for England U21s but Nugent was also called-up to the England senior side during his final days at Deepdale. And he has a record to boast, scoring one goal in his only competitive senior game, a 93rd-minute tap-in against Andorra.