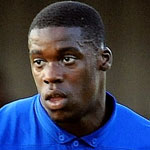 The striker was a product of Leicester's youth set-up but was born to Ghanaian parents in Hamburg, Germany. Schlupp moved to England, and Milton Keynes, as young boy before City snapped him up, seeing a player with bags of potential.

He went out on loan to League One side Brentford in 2011 as a way of getting more first-team experience and excelled, scoring six goals in nine league appearances for the Bees. City knew they had a good player in the making in Schlupp.

His form with Brentford resulted in him being involved in first team affairs at the start of the 2011-12 season, under Sven-Goran Eriksson, and he really made his mark in the League Cup tie at Rotherham United, where he hit a hat-trick in his first competitive senior appearance for the Foxes, becoming the first Leicester player to do so since 1945.

He went on to make his league debut for the club in a 2-0 defeat against Reading in August 2011 and scored his first league goal in a 4-0 win over Derby County in October.

Internationally, Schlupp had been capped for the Germany U19s squad due to being brought up in Germany, but was called-up for the Ghana squad in 2011.