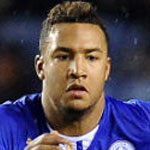 Loughborough-born and die-hard City fan, Moore showed plenty of signs of what was to come when he captained the club’s youth team to the quarter-finals of the FA Youth Cup in the 2010-11 season.

His development was aided by a successful loan spell with Bradford City in League Two, getting regular match action with 22 appearances for the Bantams before he returned to Leicestershire and made his senior Foxes bow just days after his return in the game against Crystal Palace, City’s first of 2012.

He didn't feature again until the final game of the season at Leeds but the following season he caught the attention of Premier League giants including Arsenal and Manchester United, but the Foxes clung on to their man, eventually getting him to pen a new three-year contract.

His form dipped in the 2012-13 season, however, and a few errors cost him his place in the side, with boss Nigel Pearson eventually deciding a loan move to Brentford was the best course of action. He was recalled from Griffin Park in March and finished the season with City.

That loan spell seemed to work for the talented youngster, with Moore claiming a regular starting role at the back alongside Wes Morgan as City pushed for automatic promotion in the 2013-14 campaign. He scored his first senior goal in a 2-0 home win against Wigan Athletic, and City rejected an approach from Fulham for his services in January.