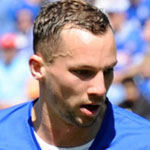 Drinkwater is a box-to-box midfielder who rose through the youth ranks at Manchester United before finding his way to City via a number of impressive loan spells.

Born in Manchester, Drinkwater shone for United's under-18s side and reserve team but never pulled on the Red Devils' famous first-team shirt, despite being named in one matchday squad.

To gain more first team experience the Premier League giants loaned him out to Huddersfield Town, Cardiff City and Watford. But it was with Barnsley that Drinkwater caught the eye of the Foxes scouts. Impressing at Oakwell, City pounced in the winter transfer window of the 2011-12 campaign and got their man for an undisclosed fee.

Capped at under-18 and under-19 level for England, Drinkwater soon become a Leicester first-team regular in his first half-season at the King Power Stadium, scoring two goals in his 19 league appearances.