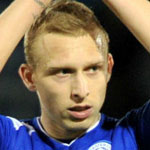 De Laet is a Belgian defender who signed for City in a double deal with Matty James, his Manchester United team-mate at the time, in the summer of 2012.

Having been schooled at numerous Belgian sides before his arrival in England, the last being Royal Antwerp, Stoke City snapped him up but he never really made an impression there. Despite this, United signed him to a three-year deal in 2009 and he actually made three appearances for them, albeit not being able to cement a place in the club's first-team plans.

He had numerous loan spells away from Old Trafford, including Sheffield United, Preston North End and Portsmouth before Norwich City took him on-loan for their first season back in the Premier League.

Capped for Belgium at under-21 and senior level, Pearson saw enough of the right-back, who can play all across the back four, to add him to his squad for the 2012-13 season.