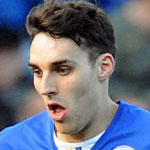 James was part of a double transfer from Manchester United which also included youngster Richie De Laet moving to City in the summer of 2012, the fee being undisclosed, as boss Nigel Pearson continued his squad rebuilding.

The Bacup-born player came through the youth ranks at Manchester United but failed to make a first-team appearance for the Premier League giants. He was a regular in their under-18s side, and then reserve side, and although his main position was in central midfield, he also showed he could play in defence.

James had two loan spells with Preston North End to gain some valuable first-team action, while United boss Alex Ferguson's son, Darren, managed at Deepdale, but he was recalled as soon as Darren was sacked.

Pearson saw plenty of quality in the youngster when he signed him alongside De Laet, penning him to a three-year deal at the King Power Stadium before the start of the 2012-13 campaign.