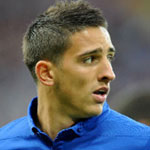 The Frenchman was signed in the summer of 2012 from Guingamp and bucked the trend of manager Nigel Pearson bringing in players of a hungry and battling nature, offering plenty of flair to a squad gunning for promotion to the Premier League through the money invested by new Thai owners.

Sensational and frustrating in equal measure, Knockaert scored some sensation goals as City made the play-offs in the 2012-13 season but he will unfortunately be remembered as the man who missed the crucial penalty in the play-off semi-final at Watford. A goal would have seen the Foxes to Wembley but the attacker missed the spot-kick and the Hornets duly went down the other end to score through Troy Deeney and knock Leicester out.

Capped by France at under-20 and under-21 level, his skills ensured he fast become a fans’ favourite and he continued to shine in City's bid for promotion to the top flight in the 2013-14 campaign, although he did have to win his regular starting place due to a change of formation at the start of the season that saw his game time limited.