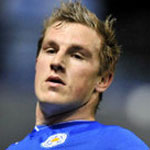 The New Zealander opted for a move to City over Millwall, a club he’d previously enjoyed a loan stint with, when West Brom accepted offers for the striker, and he made an impressive start to life as a Fox, scoring just 24 seconds into his debut against Huddersfield Town before notching a hat-trick in a trip to Bristol City not long after, making it six goals in his opening three matches in the blue and white.

He came over to England with the Baggies after starting out at New Zealand clubs Waikato FC and Hamilton Wanderers. The Auckland-born frontman impressed on trial for the West Midlands club and he impressed in their youth side and reserve team before making the step-up to first-team football.

Chances were hard to come by at The Hawthorns, however, and the Baggies sent him out on loan to a number of clubs including Barnsley, Brighton, Birmingham City and Millwall before he left the Baggies on a permanent basis to Leicester. His start was emphatic but the goals tailed off and in the 2013-14 season City boss Nigel Pearson preferred the strike pairing of Jamie Vardy and David Nugent, with Wood being used mainly as back-up.

A New Zealand international, Wood has made over 30 appearances for his country and bagged ten goals along the way.