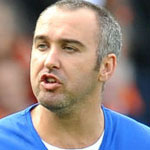 Lancashire-born Taylor-Fletcher was somewhat of a journeyman when Nigel Pearson made the surprise decision to add the player to his attacking options for the 2013-14 campaign.

He penned one-year deal at the King Power Stadium after leaving Blackpool when his contract expired. Taylor-Fletcher spent six successful years by the Seasiders, helping the club claim an unlikely place in the Premier League and battling to keep them in the top-flight, too. He amassed over 200 appearances for the Tangerines.

The forward was a late bloomer, starting his career with non-league Northwich Victoria before moving on to Leyton Orient but failing to cement a first-team role, instead being loaned out to Dagenham and Redbridge and Grays Athletic.

It was with Lincoln City where he really made a name for himself, making almost 100 appearances for the Imps before attracting the interest of Huddersfield Town, where he spent two seasons before moving on to Blackpool and aiding their unlikely push for top flight football.

He made his City debut just a day after penning his Foxes deal and ironically it came as a substitute against former club Blackpool. He bagged his first City goal in an exciting 5-3 home win over Bolton Wanderers but has been used mainly as back-up to the first team.