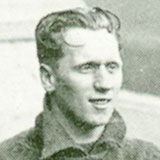 The Yorkshire-born striker was one of Leicester's all-time top goalscorers thanks to his envious record of 148 goals in 247 league appearances for the Foxes - he also notched eight goals from 12 FA Cup ties.

They all came in a six-year spell with Leicester after arriving at the club from Barnsley and Hine went on to score more than 300 senior goals over a superb 17-year career which saw him go on to play for Huddersfield Town and Manchester United before finishing this career at former club Barnsley.

He started as he meant to go on by scoring twice on his debut against Burnley in January 1926 and he never looked back, with his qualities soon gathering the attention of the national squad. He got six full England caps and netted four goals before going on to net a treble for the Foxes in their record 10-0 thumping of Portsmouth in the 1928-29 season.

His move to City saw him move up from Second Division to First Division action and he struck 32 goals in one campaign to help the team to runners-up spot. It wasn't the only time the goal-getter bagged over 30 goals in a City shirt.

He was allowed to move back to Yorkshire with Huddersfield Town for £4,000 - a bargain even at the time for such a goalscorer - but Leicester got his best days, even though he did go on to exceed the 300-goal tally after his departure.

On his return to Oakwell Hine he actually took on the role of player-coach under a former City player Angus Seed but called time on his career shortly afterwards.