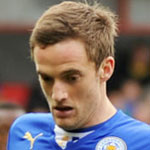 Very much a fans' favourite at City, King was snapped-up by Chelsea before being released as a 15-year-old in 2004. City's youth academy took him on before he progressed to make his first-team debut in a 0-0 draw at Wolves in 2007.

He made 11 appearances the season the Foxes were relegated to League One in the 2007-08 campaign but it was the following season, where Leicester were untouchable in becoming champions and returning to the second tier of English football, in that he really made his mark. His impressive start to that campaign saw him awarded a new three-year contract with the club and he went on to be named the club's Young Player of the Season.

He also won the Players' Player of the Year award jointly with Jack Hobbs the following season as City just missed out on the play-offs. A skilful midfielder who chips in with some superb goals, King became a regular member of the Wales squad and was included in the PFA Championship Team of the Year at the end of the 2010-11 campaign.