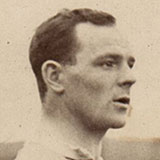 Scottish-born Duncan goes down as one of the City greats - not just for his days as a player at Filbert Street, but also for his time as manager of the Foxes.

He could play as an inside-forward or wing-half playmaker and highlighted his talents in his debut for Lochgelly United as a teenager when he scored a hat-trick. His form for Lochgelly alerted Raith Rovers and manager Peter Hodge, who duly in-turn brought him down to Filbert Street when he became manager. John actually arrived at City alongside brother Tom, for a joint fee of £1,500.

His first season was a good one, netting 20 goals as City missed out on promotion only on goal average. Ironically, the only match he missed in that season was the final and decisive one, where Leicester fell to defeat against Bury - it cost them promotion.

It wasn't long before Duncan was firing City to promotion, netting 30 goals along the way. Remarkably, six of those goals came in one match when the Foxes thrashed Port Vale 7-0 on Christmas Day. His form in the blue and white was also enough to see Duncan selected for his country, winning his first Scottish cap in October 1925. He netted in that game against Wales but, frustratingly, didn't get much of a look-in after.

In 1928 and 1929 Duncan's goals, and his creative work, saw City twice miss out on the title. But his best days as a player at Filbert Street were to come to an end due to a disagreement with the club. Duncan was keen to run a pub whilst he was still on the playing staff, something the board refused him. A loan away from the club was a possibility, but Duncan's desire to run a pub and pick his matches soon saw interest die down.

After years of running his pub, playing Sunday League football and also setting up a City Supporters' Club in 1940, the Foxes turned to Duncan to manage the club in 1946. It went relatively well, with City playing attractive football in the tough return to peacetime football. He also led his Second Division side to their first-ever appearance at Wembley before leaving the club in 1949 after further disagreements with the board - mainly down to differences in transfer policy.