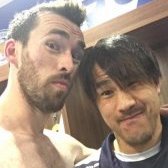 Show us yer mix tape, homage to the humble cassette

By MrsJohnMurphy, 10 September 2018 in The Music Forum