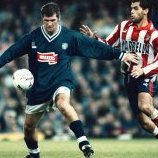 By The whole world smiles, 14 April in Leicester City Forum