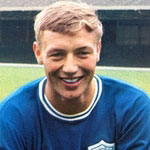 The Leicester scouts spotted Cross playing locally for Enderby Town when they signed him in May 1959 and he turned pro with the Foxes just over a year later. It was a fine spot, with Cross going on to become one of the club's most consistent players in its history. He featured in 599 senior games for the club and fell just short of Adam Black's club record for total league appearances.

In total, Cross gave 16 years service to the club. As a 15-year-old he netted on his reserve team debut, scoring against Brighton, and then scored on his senior side debut against Birmingham City in April 1961. Despite early signs that he'd be an out-and-out goalscorer, Cross was a player who could play in a variety of positions, something that was soon spotted and a reason why he netted just 29 Football League goals. His ability to play all over the park also had an impact on his international career, according to some. He featured for England at U23 level but was ignored at senior level.

The swapping of Cross and Frank McLintock was an often-used tactic by Matt Gillies, City manager of the time, but soon Cross settled as a centre-back. He went on to reach two FA Cup Finals and two League Cup Finals with City, as well as collecting a Second Division Championship medal. He had plenty of energy and enthusiasm, something not usually expected from a defender, and something that City fans of the time remember well.

As well as football, Cross was also a keen cricketer, something he often played in the summer months with no football going on. However, following his farewell from Filbert Street, Cross signed for Brighton and Hove Albion and then Preston North End, continuing to produce top-class defensive performances even in his latter years. He played in the lower leagues towards the end of his footballing career, playing for Enderby Town and Lincoln City before even trying his hand as player-manager of Hinckley Athletic.

After his career Cross made the headlines for all the wrong reasons in 1993 when he was jailed for the misuse of Post Office funds, and on his release went on to become involved in the knitware trade and as a caretaker at Loughborough College.