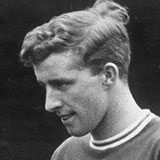 Considered to be one of the finest and most skillful ball players in Leicester's history possessing elegant control and visionary passing skills coupled with a tough resilience, he was the playmaker and creative force of the great Leicester side of the 1960s under Matt Gillies, including the 'Ice Kings' side that fell just short of winning the double in 1962-63. Gibson formed a deadly partnership down the left-flank of Leicester's attack with Mike Stringfellow and became a key fixture in the Leicester side as they chased the double with the club sitting top of the league with 5 games to go and reaching the FA Cup final, Gibson then helped Leicester to victory in the 1964 League Cup final scoring a goal in both legs of the final. He also helped Leicester to the 1965 League Cup final and the 1969 FA Cup Final, though they lost on both occasions.

Gibson gained 7 caps and scored 3 goals for Scotland, including a goal against Spain at the Santiago Bernabeu just 12 months before Spain became European Champions. Gibson made his debut for Scotland in a 4-1 victory over Austria in front of 94,500 fans at Hampden Park on 4 May 1963 in a game that was abandoned after 79 minutes after the Austrian team's foul tactics caused referee Jim Finney to abandon the game in fear of player safety.

Many felt he was left to soon as he moved to Aston Villa in September 1970 where he remained for two years before ending his career with Exeter City. He retired in 1974.

He later became a postman before running a residential care centre in Whetstone in Leicestershire.