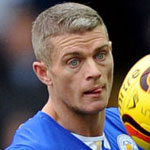 Barking-born Konchesky is a tough-tackling, no-nonsense full-back who signed for City in the summer of 2011, penning a three-year contract for an undisclosed fee from Liverpool. He made 18 appearances for Liverpool but soon fell down the pecking order and was loaned out to Nottingham Forest, where he spent the end of the 2010-11 season.

He was one of the Foxes' biggest signings in the summer of 2011, having made his name at Charlton Athletic before Tottenham Hotspur took him on loan and West Ham United secured his services. A move to Fulham followed before Roy Hodgson took him to Anfield when he took charge, but Konchesky soon followed his manager out of the door.

He's been capped by England at U18 and U21 level and impressed enough in his performances to win selection for the full England senior side, playing twice from the subs bench in friendly matches.